Understanding The 8 Limbs Of Yoga 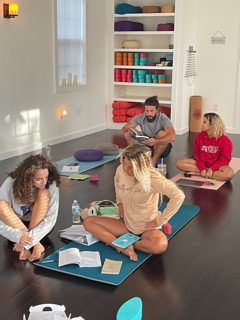 Patanjali’s Yoga Sutra, also known as “Ashtanga”, means “eight limbs”, which is a yoga philosophy. These 8 steps have been dubbed as the 8 limbs of yoga. They function as guidelines for living a life that has meaning and is purposeful. They provide novice and seasoned yoga followers the tools to enhance their moral and fundamental codes while building their self-discipline as well. In doing so, the long-term benefits will hopefully help you in the pursuit of spiritual, emotional, and physical rejuvenation.

Here at Satya Anahata Yoga, we understand how yoga can drastically change the course of your life for the better. That is why when the fundamentals have been mastered, it makes the rest of your involvement feel much more natural. Let’s take a look at what each step of the limbs of yoga mean and how yoga studios in Delray Beach are putting these disciplines into practice.

The first step in the 8 limbs of yoga is Yama. This phase deals directly with a person’s ethical standards and integrity, emphasizing the importance of our behavior and how we conduct ourselves. Yamas are practices that align with what we know as the “Golden Rule” which states- ”Do unto others as you would have them do unto you.”

It also refers to vows, practices, or disciplines, that are affiliated with the world that surrounds us. While being a devout yoga follower will do wonders for improving your physical and mental fortitude, it will be for nothing if your daily stressors are overshadowing or hindering your progression in any way. You can always coordinate with the professionals at yoga studios in Delray Beach for how these steps can be best put into practice, especially if you’re just skimming the surface of yoga.

The Five Yamas Yoga Philosphy are as follows:

Niyama, the second limb, refers to duties that are self-directed, and it also takes our actions in the outside world into consideration. The prefix “ni”, means “within” or “inward”. The five Niyamas include:

• Tapas- Discipline or burning desire or “burning of desire”

• Svadhyaya- Self-study or self-reflection, the study of spiritual texts

• Isvarapranidaha- Surrendering to a higher power

Niyama is a good discipline for those who are looking to go further along in the Yogic path and is a great way to build character. The Niyamas are closely related to the Koshas, which represent layers or sheaths from a physical body to an inner essence.

The physical part of yoga is the 3rd step on the path to freedom. The word “asana” means seat, more specifically, the seat you take for the practice of meditation. The posture for asana should be something that is both resilient and comfortable. The idea is to be comfortable enough so that aches and pains aren’t the epicenter of your yoga session.

Translating to “breath control”, during this stage, techniques are put in place to gain proficiency in the respiratory process and channel the connection between the emotions, mind, and your breath. Devout yogis believe that it not only rejuvenates the body but extends your life. Pranayama can be practiced as an isolated technique, or it can be integrated as part of a daily hatha yoga routine.

Pratyahara means sensory transcendence or withdrawal. Once we’ve reached this stage, we are making a concerted effort to draw our focus away from the outside world and external stimuli. Our attention is directed internally since there is a detachment from the senses. It allows people to take the time for self-reflection. The period of withdrawal allows users to observe these cravings or habits that can act as a hindrance to your health.

By actively practicing pratyahara, it will create the setting for Dharana (concentration). Once the noise of outside distractions is at bay, it will become much easier to deal with distractions of the mind. It’s not an easy task, but going through the motions of concentration that come before meditation, it becomes easier to slow down the process of thinking. This is because all of your time and energy is devoted to a single mental object.

Meditation (Dhyana) and concentration (Dharana) can be one and the same, with a slight distinction to be made between these two stages. Dhyana is being aware without having to focus. The mind has been quieted at this point, producing very few thoughts. The strength/stamina that is required to get to this place is impressive, to say the least.

The final stage of Samadhi can be best described as a state of ecstasy. At this point, the meditator will merge with their point of focus and will transcend the self. The realization will hit when you’ve established that connection with the divine.

If you’re looking to immerse yourself in a comprehensive yoga regime, our team at Satya Anahata Yoga is here to help. For more information on our studio and classes, you can contact us to set up a time to speak!